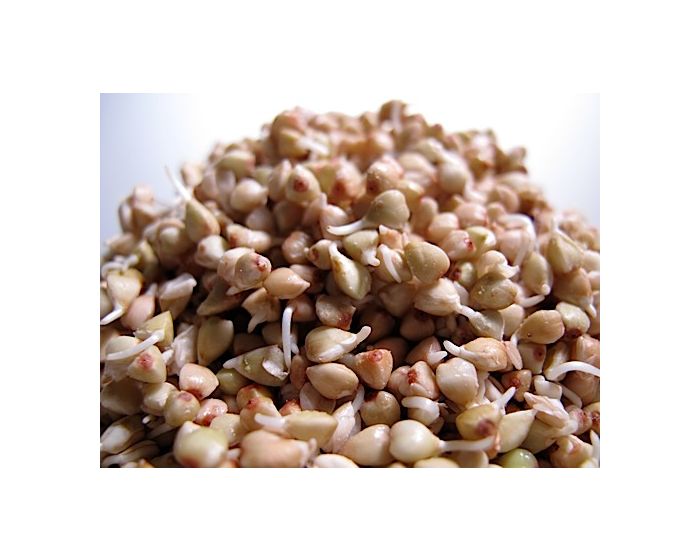 Prep 2/3 cup of seeds by running cool water through them for a minute or so.

Soak the seeds in cool water for 30 minutes.

Drain off soak water. Do not ever soak again.

Keep your Sprouter in a relatively low light location.

Rinse and Drain thoroughly - with cool water every 8-12 hours.

Harvest when your seeds have tiny Roots, and eat or Refrigerate your crop.

We have grown Greens - on soil - in Trays, for almost 2 decades. But, we now have options. We have multiple Soilless Mediums (including Baby Blanket and Vermiculite), and organic liquid Kelp Fertilizer to provide your plants some nutrients to draw upon as they grow. Baby Blanket is a thin organic material that you soak before planting upon. It holds moisture and is the least messy and compact medium we know of. Vermiculite is a mineral which holds moisture supremely, dispenses added nutrients over time and in general acts much like soil. We think you should try all of them if you can - there are differences and though they are minimal you may prefer one method over the other.

Instructions are pretty much the same, regardless of what medium you use, but we have specified differences where they exist. We may be offering other, or different Mediums (products are always coming and going) then when we wrote these instructions, or you might be using one you got somewhere else. Please follow our instructions that refer to Baby Blanket for other thin mediums (i.e. STG Pads). Consider Perlite, Potting Soil or other such fluffy mediums to be the same as Vermiculite, and so follow directions labeled for Vermiculite. There may be some small differences, but they're likely to be minor.

We do not grow hydroponic Greens. We have tried but have never gotten the yields we get with soil, and the flavor of the crops is nowhere near as fine. They taste watered down. Now that we have a soilless alternatives (Baby Blanket, Vermiculite, etc.) we are even less interested in hydroponic Greens growing. But, if you want to try - go to Val at Go Green/Green Smoothie - she is the queen of home hydroponics. Tell her us Sproutpeople sent you!

Your Planting Tray (the one with the soil or medium in it) MUST have drainage holes or slits! Nothing will grow in a medium that can not drain - that condition is commonly called "flooded". When using Baby Blanket or Vermiculite your Planting Tray must also have drainage, but we do use the Drip Tray to hold some water at times in the growing process. (You'll see the TIP in our instructions, above.)

Some years ago a person wrote an article stating that consuming huge quantities of buckwheat greens juice, as he had done, could cause skin sensitivity to the sun. After reading his article we agree that consuming such large amounts is not recommended. We have always promoted moderation in food consumption and that applies here. Buckwheat in small quantities can promote health. Although some people may be sensitive to even small quantities of buckwheat lettuce, for most people it is a healthy addition to their diet.  It contains rutin, a bioflavinoid not found in beans or grains, that can help strengthen blood vessels.   The author of the article makes this statement near the end: "I would like to make the disclaimer that I am not advising people to stop eating buckwheat. The Latin expression dosis sola facet venenum (the dose makes the poison) attributed to the ancient Romans could be applied here. A small quantity of buckwheat greens (or buckwheat lettuce as it is often called) in an individual diet could allow for healthy nutritional benefits without the negative effects of large amounts......" Fear spreads.  Please be careful not to take just anyone's claims at face value.  Use your common sense.  Avoid Dogma.  Read the article - thoroughly - and make your own decision.

Seed Prep Measure out 2/3 Cup of seed* into a strainer, sieve or your Sprouter. Pick out anything you don't think should be there (shell or plant pieces, imperfect seeds if you wish (we don't), etc.). Buckwheat Groats create amazingly starchy water, so it can help to run some water through them before Soaking. Do it for about a minute. This won't remove all the starch, but any less is good - as you'll see shortly.

Soak Transfer your seeds into your Sprouter, or a bowl. Add 2-3 times as much cool (60-70 degree) water. Mix seeds up to assure even water contact for all. Allow seeds to Soak for 30 minutes. Buckwheat Groats take up all the water they need quickly, that is why their Soak time is so short. They may get waterlogged if soaked too long, and may never sprout - so - Don't over-soak them!

Sprouting Empty the seeds into your Sprouter (if necessary). Drain off the soak water. You can use it - it has nutrients in it.

Always be sure to Drain very thoroughly. The most common cause of inferior sprouts is inadequate drainage. Even the best designed Sprouting Device holds water, so pay special attention to this step.

Set your Sprouter anywhere out of direct sunlight and at room temperature (70° is optimal) between Rinses. This is where your sprouts do their growing. We use a counter top - in the corner of our kitchen, but where the sprouter won't get knocked over by cats, dogs, kids or us. We don't mind the indirect sunlight or the 150 watts of incandescent light, because light just does not matter much. A plant can only perform photosynthesis when it has leaves, and these sprouts are definitely not going to have leaves. Until a plant has leaves, light has little if any effect. Sprouts also happen to like air-circulation, so don't hide your sprouts.

We usually stop here (or sooner if we have any root at all). We like our Buckwheat Groat Sprouts very small.

As always, we suggest that you taste your crop at Every Rinse - including the very first - just after the Soak period. The soaked seeds are already alive and are now super-nutritious - and - they now have no enzyme inhibitors (a very good thing indeed) so they'll digest themselves and nourish you.

Harvest Your sprouts are done 8-12 hours after your final Rinse. Be sure - if you plan on storing your crop - to Drain them as thoroughly as possible after that final Rinse. The goal during the final 8-12 hours is to minimize the surface moisture of your sprouts - they will store best in your refrigerator if they are dry to the touch.

Refrigerate Transfer your sprout crop to a plastic bag, our shelf life extending Produce Storage Bags, or the sealed container of your choice (glass is good too). Whatever you choose - put them in your refrigerator - if you can keep from eating them all first.

*Seed to Use If using Sproutpeople's Single Harvest Pack - use the whole bag.

These seeds will yield approximately 1.5:1 (you get 1.5 pounds for every pound of dry seed), so in theory you can start with up to as 2/3 as much dry seed as your Sprouter has capacity. We generally advise maxing out at 1/2 capacity, until you get used to growing a particular crop. 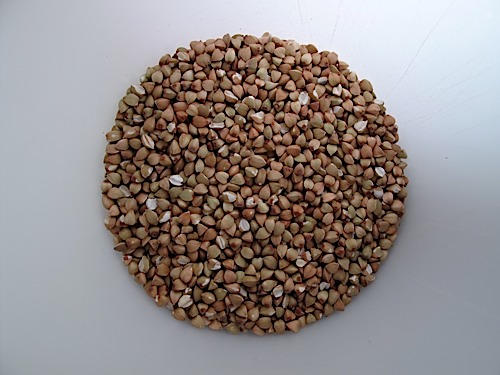 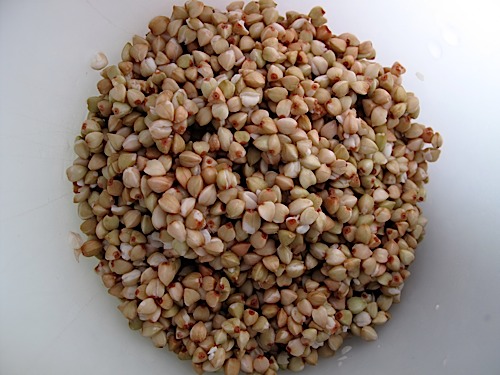 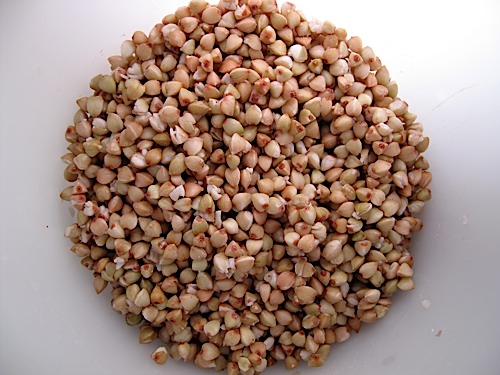 12 hours later... another Rinse/Drain cycle. You can be done - if you haven't eaten them already, or keep on sprouting. 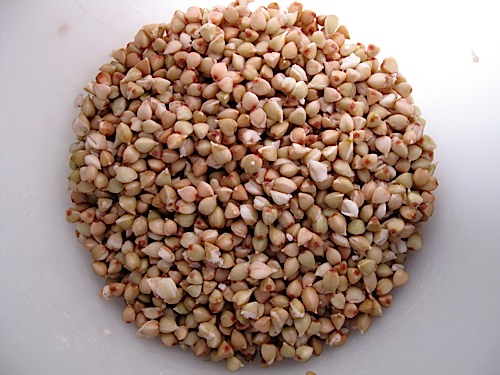 12 hours later, and another Rinse/Drain cycle. You can be done - now, before, or in another 12 hours. 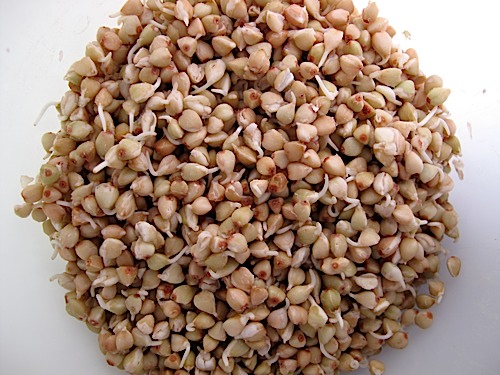 12 hours later.... Harvest your crop before it gets too sprouted.