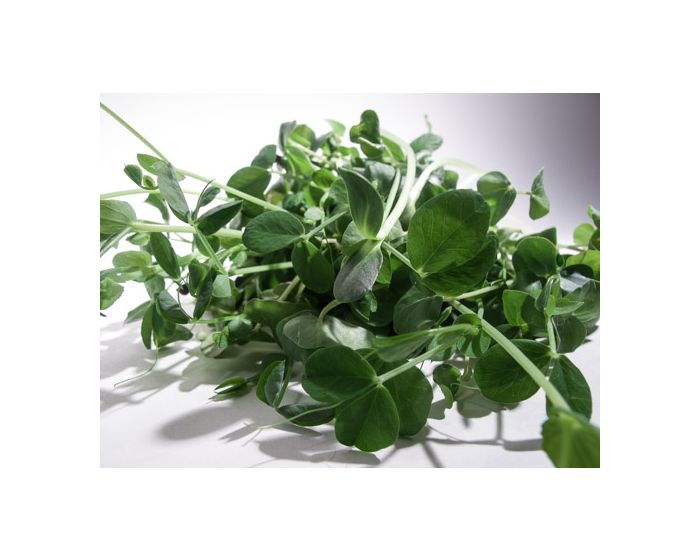 Sunflower seeds float. To Soak them all evenly, fill the jar to the top with cool water and cover with a lid.

Rinse and Drain again with cool water - every 8-12 hours.

When your seeds have the tiniest root showing, plant them on a thoroughly moistened medium. We use 75% Coconut Coir and 25% Earthworm Castings.

Cover your crop with another tray or plate, to keep light out and moisture in.

Keep your medium moist by watering gently as needed.

When your plants have begun to push up the cover, remove the cover and move your crop to a well lit location.

Harvest when the leaves are open and most of them have shed their hulls.

Cut just above the medium, with a scissors or sharp knife.

We have grown Greens - on soil - in Trays, for almost 2 decades. But, we now have options. We have multiple Soilless Mediums (including Hemp Felt and Vermiculite), and organic liquid Kelp Fertilizer to provide your plants some nutrients to draw upon as they grow. Hemp Felt is a thin organic material that you soak before planting upon. It holds moisture and is the least messy and compact medium we know of. Vermiculite is a mineral which holds moisture supremely, dispenses added nutrients over time and in general acts much like soil. We think you should try all of them if you can - there are differences and though they are minimal you may prefer one method over the other.

Instructions are pretty much the same, regardless of what medium you use, but we have specified differences where they exist. We may be offering other, or different Mediums (products are always coming and going) then when we wrote these instructions, or you might be using one you got somewhere else. Please follow our instructions that refer to Hemp Felt for other thin mediums (i.e. STG Pads). Consider Perlite, Potting Soil or other such fluffy mediums to be the same as Vermiculite, and so follow directions labeled for Vermiculite. There may be some small differences, but they're likely to be minor.

We do not grow hydroponic Greens. We have tried but have never gotten the yields we get with soil, and the flavor of the crops is nowhere near as fine. They taste watered down. Now that we have a soilless alternatives (Hemp Felt, Vermiculite, etc.) we are even less interested in hydroponic Greens growing. But, if you want to try - go to Val at Go Green/Green Smoothie - she is the queen of home hydroponics. Tell her us Sproutpeople sent you!

Your Planting Tray (the one with the soil or medium in it) MUST have drainage holes or slits! Nothing will grow in a medium that can not drain - that condition is commonly called "flooded". When using Hemp Felt or Vermiculite your Planting Tray must also have drainage, but we do use the Drip Tray to hold some water at times in the growing process. (You'll see the TIP in our instructions, above.) 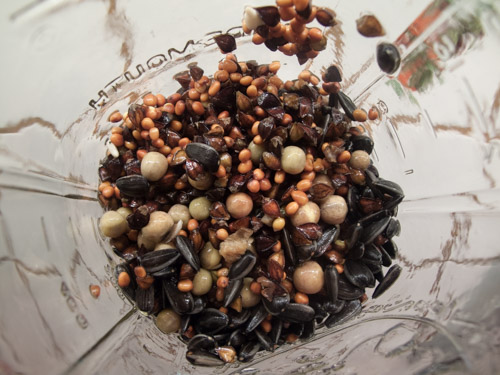 Nalo Greens benefit tremendously from being sprouted prior to planting, so we Soak them for 8-12 hours, being certain to keep the floating Sunflowers submerged, by using a jar with a lid - completely filled with cool water.
After you drain off that soak water (you'll want a Screen Lid for your Jar), then Rinse and Drain - your crop will look like this. 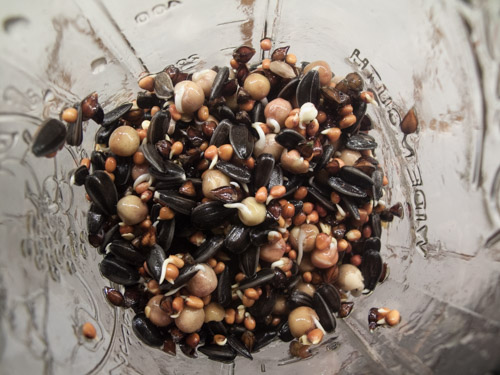 Though this is 24 hours later -
You will have Rinsed and Drained your seeds 12 hours ago, and once again - just before this picture is taken. 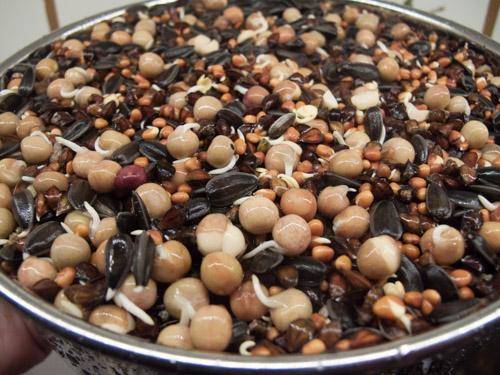 Minutes later....
My freshly Rinsed and Drained Nalo Greens are germinating nicely, so it is time to plant them.
Here planted on my thoroughly moistened medium: 60% Coconut Coir, 20% Vermiculite, and 20% Earthworm Castings in our lovely Stainless Steel Tray Sprouter. 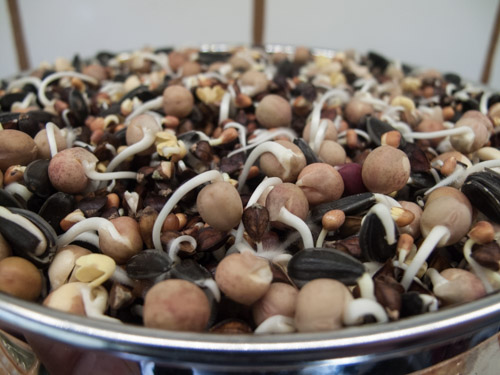 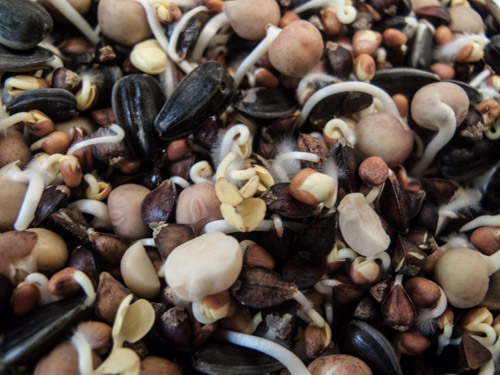 12 hours later
We can see root hairs (That is NOT mold! Follow that link to learn :-)
which are on the Radishes, and the Sunflowers. 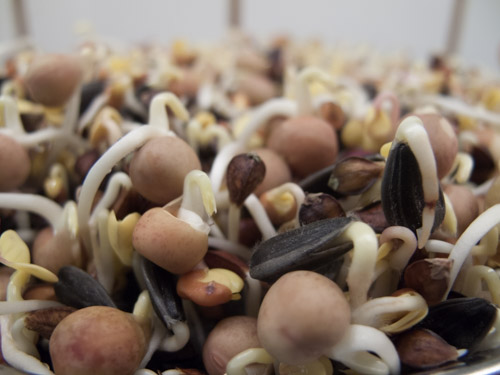 12 hours later...
Everything is growing along nicely.
If you can zoom in on this picture you will see the difference between Monocot and Dicot seeds. The Peas are the Monocots here, the others are all Dicots. The Pea shows this difference clearly. If you look closely you will see that the root grows one way (down), while the shoot grows the other (up). The Dicots all send their root down and push the seed up. These seeds will shed their hulls, revealing their set of 2 leaves. Isn't nature a trip?! 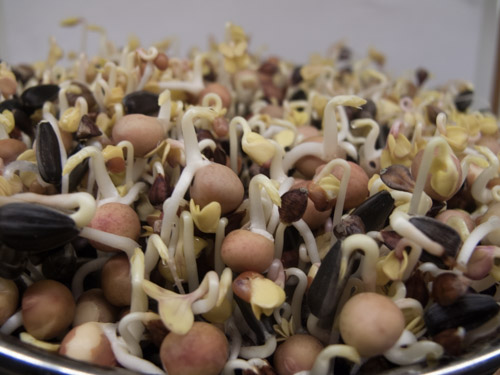 12 hours later...
I just want to mention here - though it's fairly obvious - that I usually over-plant. Your crop should probably look a little sparser. As you'll see in the following pictures, my over-planting works fine, but I have access to many tons of seed so I often get silly when growing - which is pretty much all the time =:-D. 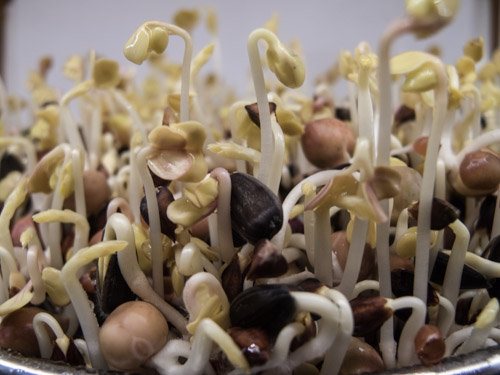 12 hours later...
Though everything is growing - the Radishes are growing faster.
This is expected and normal - I just like to share details =;-)
It's time to uncover your crop and expose it to light. Remember - since you are growing in a tray you may use direct sunlight. 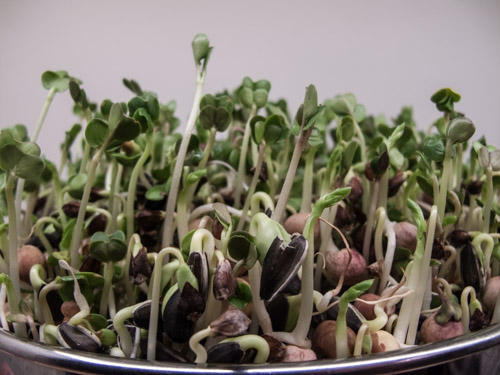 12 hours later...
As I like to say - photosynthesis happens.
Is this not amazing?! 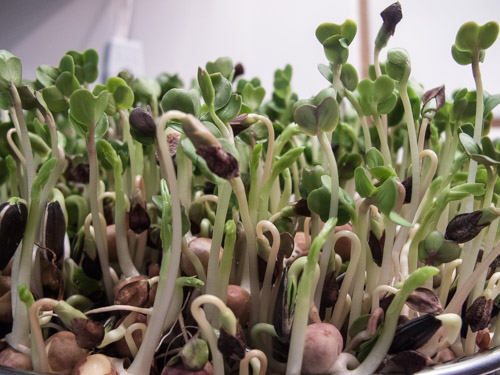 12 hours later...
The Buckwheat has now caught up with the Radishes. 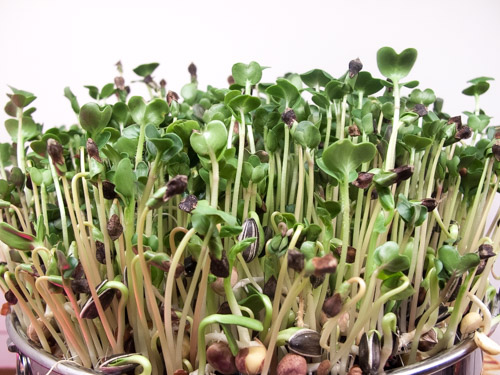 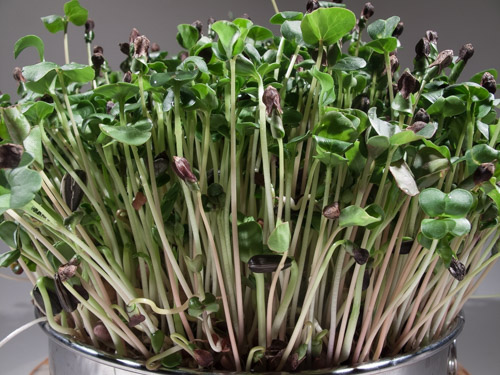 24 hours have passed this time.
The Buckwheat has now grown taller than the Radishes. 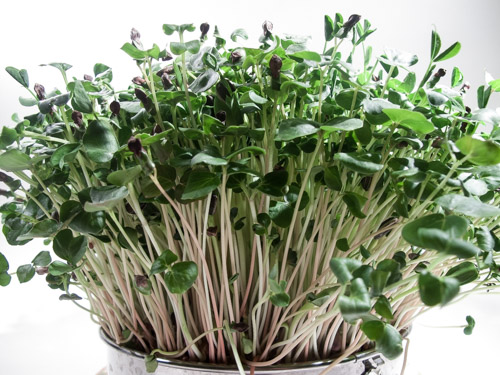 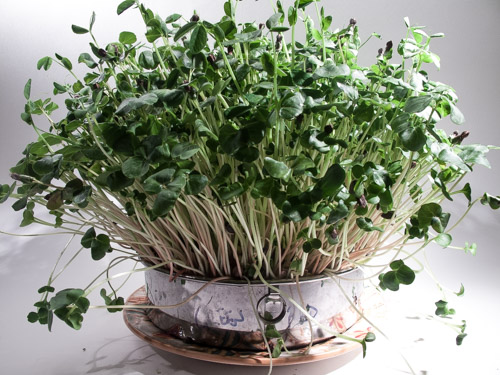 24 hours later....
It's harvest time! Try to remove some of the remaining seed coats (hulls) by holding your tray sideways and rubbing your hand gently back and forth across the plants. There will still be some hulls but you can pick them off or discard those greens. Enjoy!